If you’re generally a videographer, the Panasonic Lumix DMC-FZ2500 ($1,199.99) is an appealing camera on paper. It packs almost all the power of the Panasonic GH4, a darling of the pro video world, and puts it into a 1-inch bridge camera with a 20x zoom lens. Add support for an external microphone and variable in-lens neutral density, 4K capture, and very fast autofocus, and you should have a camera that pleases videographers and still photographers alike. But its lens performance is inconsistent, and image quality suffers noticeably when zoomed in, so that it is a tough sell at this price. For a premium bridge camera, both still and video shooters are better off with our Editors’ Choice, the Sony RX10 III, a more expensive, but in many ways more capable, option. 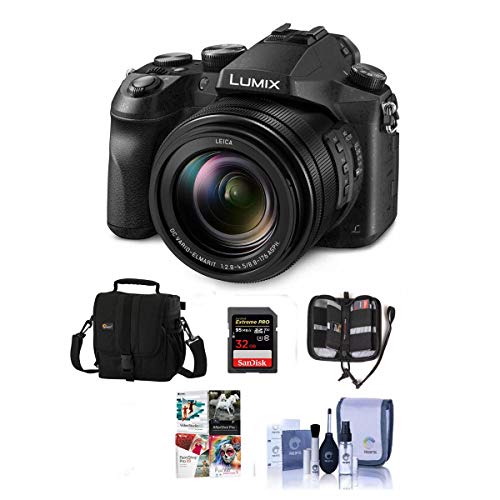 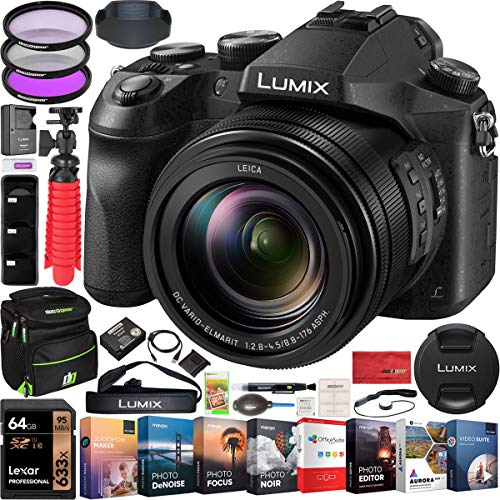 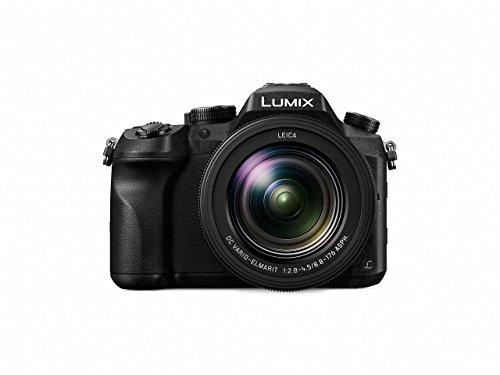 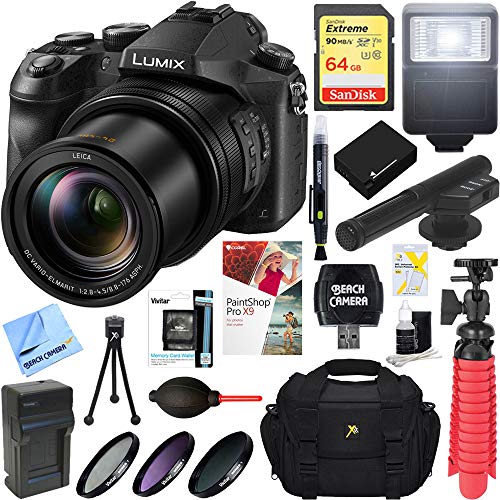 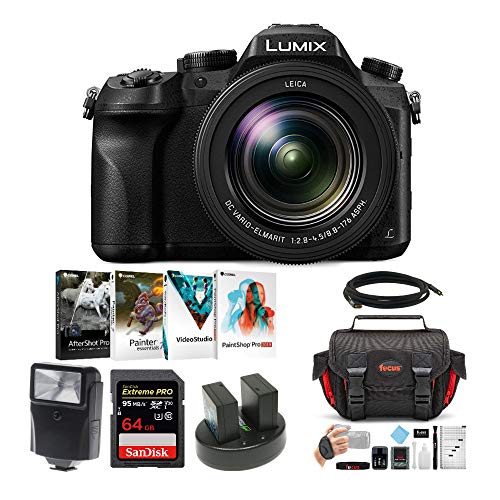 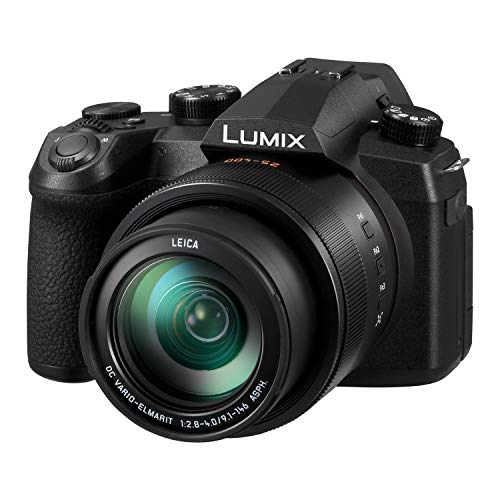 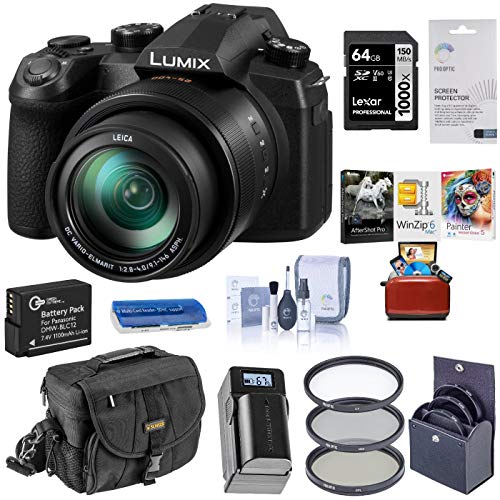 The added weight is mostly in the lens, which has a design that’s more complex. When you power the camera on it does extend, but it doesn’t change position when adjusting focal length, so it’s technically a collapsible internal zoom design. Build quality is similar to the FZ1000, with a polycarbonate body and no weather sealing. The Sony RX10 III is sturdier—its chassis is magnesium and it is sealed so you can make make use of it in inclement conditions.

On-body controls are ample. There are three programmable Fn buttons on the left side of the lens, along with a switch to set the in-camera ND filter (Off, 1/4, 1/16, 1/64, and Auto settings are available). The drive mode is manipulated via a dial on the top, to the left of the pop-up flash and hot shoe, while the standard Mode dial and On/Off switch sit to the right of the top hump.

The top of the handgrip is flat and houses two control dials, Fn4, Record, and the zoom rocker/shutter release. The grip itself feels pretty good thanks to a rubberized finish and an indentation to rest your middle finger.

Rear buttons commence to the left of the eyecup with Fn7, which toggles between the EVF, rear LCD, and eye sensor functions by default. To the right you’ll find AF/AE Lock, surrounded by a toggle switch that changes the focus mode (AFS/AFF, AFC, and MF are available). Fn5 (Q.Menu) and Fn6 (Trash) are the rear programmable buttons, joined by fixed Play and Display controls. Finally, there’s a four-way joypad (ISO, White Balance, Macro AF, Focus Area) with a center Menu/Set.

The physical controls are supplemented by the on-screen Q.Menu. It gives you access to the Picture Mode, Flash control, video and image quality settings, autofocus settings, metering pattern, exposure control, and White Balance by default. If you prefer a different bank of controls you can go into the menu and customize it.

All in all, it’s a solid control scheme, in line with what we’ve seen with other recent Panasonic cameras, and not far off from what you get with models from other brands. The hybrid physical/touch interface works well, in particular when you remember that you can tap on the screen to move the focus point. This is even possible when using the EVF to frame shots—dragging your finger across the screen moves the active point of focus.

There are numerous levels of focus selection available, including Face Detection, subject tracking, 49-area (which evaluates the entirety of the frame), Custom Multi (your selection of focus boxes from the 49-area setting), Center, and Pinpoint. You’ll lose the latter for the most precise focus—a single tap on the screen brings up a magnified view, in which you can drag a crosshair to set the precise point of focus.

The rear LCD is a vari-angle design, which signifies that it swings out to the side of the body and pivots through a range that allows it to face all way the forward through almost all the way down. It’s 3 inches in size, typical for a camera of this type, and very sharp at 1,040k dots. The touch functions are well integrated when shooting, and you will also swipe and pinch-zoom images when reviewing them.

The EVF is also top-notch for a camera of this type. It’s large and crisp, built around OLED technology with a 2.36 million dot resolution. There’s lots of contrast, colors are saturated, and the refresh rate is solid, even when shooting under typical indoor lighting.

Wi-Fi is built-in. You can transfer JPG images to a smartphone (Raw transfer isn’t supported) and use your Android or iOS device as a camera remote with the free Panasonic Image App. It’s a robust remote that allows you to change the focal length, tap to set a focus point, and dial in manual controls.

Ports include a connection for a wired remote control, 3.5mm for headphone and microphone, micro HDMI, and micro USB. An external battery charger is included as USB charging isn’t supported. CIPA rates the FZ2500 for 350 shots using the LCD or 270 using the EVF. It didn’t get quite that far in my field testing, which also included a good bit of video recording, image review, and Wi-Fi use. If you expect to utilize it heavily, buy an extra battery or two.

Performance and Image Quality
The FZ2500 is very speedy. It starts, focuses, and fires in about 1.3 seconds, which is a fine mark when you consider that its big lens must extend when it’s powered on. Autofocus is almost instant in ample light. If you’re zoomed all the way in focus confirmation is instant as well, but the lens can take about 0.2-second to drive to lock focus if your subject is blurred. Low-light slows the focus system a bit, but it still locks on within 0.5-second in most situations. It’s certainly a breath of fresh air compared with Canon’s 1-inch superzoom, the G3 X, which requires about 0.4-second to confirm and fire an image that’s already mostly in focus at its telephoto extreme.

Burst shooting is also a strong point. The FZ2500 shoots at 11.3fps when capturing JPGs and about 10.6fps in Raw format with fixed focus. The buffer is ample—you can get 32 Raw+JPG, 35 Raw, or 100 JPG shots at that pace before the camera slows down. If you opt for continuous focus the shooting rate drops to 7.1fps, with a strong hit rate.

If you don’t mind fixed focus and a lower resolution (8MP) JPG output, you can use Panasonic’s 4K Photo mode for high-speed image capture. It can rattle off shots at up to 30fps, ensuring you capture just the right moment, and also supports focus bracketing (which Panasonic calls Post Focus) so you can shoot a burst of images, each focused at a different point. Both are accessible via the Drive Mode dial.

I used Imatest to check the quality of the FZ2500’s lens and found it to be an underwhelming performer. At 24mm f/2.8 it does pass our 1,800-line threshold of sharpness, but just barely (1,857 lines). That’s a center-weighted figure, and while the center third of the frame is very crisp, the mid parts and outer edges are lacking, showing about 1,600 lines. This gives them a slightly soft look, but not one I’d call blurry.

Narrowing the f-stop to f/4 nets better results. The average jumps to 2,308 lines with excellent center marks (2,748 lines), strong performance in the mid parts (2,131 lines), and edges that, while not tack sharp, aren’t bad at 1,694 lines. Narrowing the aperture further is not recommended—diffraction becomes an issue and detracts from crispness at f/5.6 (2,171 lines), f/8 (1,915 lines), and f/11 (1,613 liens). There is a lttle bit of barrel distortion (1.4 percent) obvious at 24mm. Distortion goes away quickly as you zoom and isn’t an issue at longer focal lengths.

And then we get to 200mm, which is where problems learn to show. At f/4.3 the average score drops to 1,792 lines, not terrible, but not exceptional either. Image quality is fairly even across the frame. At f/5.6 you get better results, 1,954 lines, but you’ll want to stop down to f/8 to enjoy the best quality at this focal length (2,194 lines). Diffraction isn’t as bad at f/11 (1,773 lines), but unless you desire a lot of depth of field for a shot, you should avoid it.

The lens is backed by a 1-inch 20MP image sensor. Panasonic isn’t on record with this, but the sensor is likely made by Sony—its 1-inch sensor is sold to other manufacturers. I used Imatest to check its performance at all available full-stop ISO settings, and found it to be a very good performer for this class of camera.